…but I was very happy to conform!
When a revered Edinburgh College asked me to produce a painting relevant to their own Great War remembrances, we decided on the Bristol F2b.
The Bristol Fighter incidentally was always known to its crews as the “Biff” and not by the subsequent and baleful, press-led soubriquet of “Bristfit”.
Amongst the college’s former pupils were the three brothers Barnwell. Of those, one went to the Army but the other two, Harold and Frank were aeronautically inclined. Harold became a test-pilot for Vickers and would die in a crash in 1918.
Frank however became a designer at Bristol and would be partly responsible for the Scout shown below. This was a real pilots’ aeroplane and well-beloved by all. 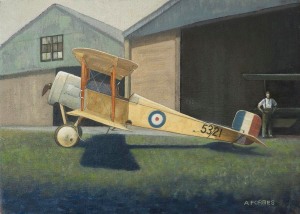 After the Scout, Frank designed the M1 monoplane, an extremely efficient fighter but destined to be un-acceptable to the biased anti-monoplane thinking of the top brass.
Frank’s next design – the Bristol Fighter – was probably the finest all-rounder produced by any of the warring nations and destined to fly on almost all fronts, surviving in the RAF until 1930.

Looking to be a wee bit different I’ve pictured this one over the deserts of Palestine. A No.1 Squadron Australian Flying Corps “Biff” about to engage a Rumpler CIV in 1918.

North -West.
The weather has been so depressing of late that I’ve decided to live in the past. Again.
So, last Summer – Ruthie and I drove up to Fort William and took a train to Mallaig. The weather was sunny and warm and the power-source was fairly warm too.

This is the most beautiful railway line in Britain and how lucky we were to see it on such a day.
To be behind that lusty Black Five was a real treat but there was to be another and less usual steam experience later on the route.
The well-kent viaduct at Glenfinnan is quite breathtaking and all constructed from concrete by the pioneering Robert McAlpine. 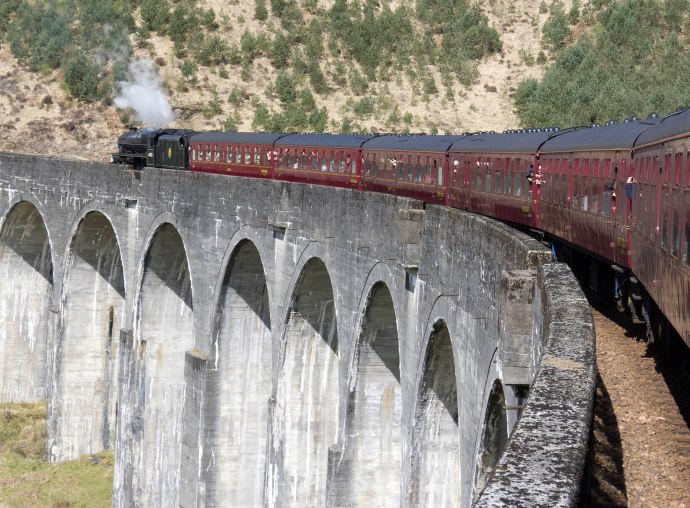 Further down the line from Glenfinnan is another fine McAlpine bridge over the bay at Loch nan Uamh. This is followed by a tunnel and then the 1 in 48 climb of Beasdale Bank. This being a tourist train the trip was taken at a fairly leisurely pace. Too leisurely for The Bank it turned out, as the speed slowed and slowed until every piston-beat shuddered through the train.
Which finally just stopped!
This inevitably led to much discussion and sage recommendations from the knowing enthusiasts and congnoscenti within the coaches who now noticed the train was speeding backwards for some two miles. Whilst no doubt much frantic shovelling was being carried out at the Black End.
Stanier’s best then fairly belted-it at the gradient which had no answer to such a determined assault.
And so to Mallaig and a welcome meal of Fish and Chips. What else???
The journey back was largely downhill – so uneventful except for the surroundings. What a place to live eh?
All this and steam too.