When I go out for a cycle I take an expendable phone in case of some catastrophic event. Something beyond a puncture or a chain-breakage – things which we manly-men are expected to rectify on the road. Well, at the side of it anyway. Hopefully without rain or midgey-attentions.
A phone that I won’t be heartbroken about if I end up skiteing down the road with it in a rapidly shredding pocket. Not an i-Phone 5s then…
My ancient Nokia 6300 was replaced recently with one of the same ilk but younger by some margin. The 515, supposedly the last of its kind and with a 5mp camera superceding the old 2mp one.
Because images from phones are ubiquitous now I thought I’d do two comparison images. The Nokia and a good Nikon SLR camera.
This is my best fixed-wheel bike, taken in low-contrast conditions today. Not a nice day but good for a test of subtle-tone rendition by the two contenders. It turns out there is no comparison 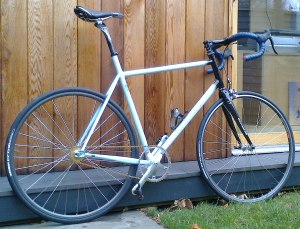 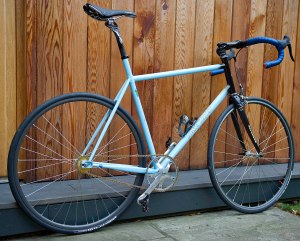 It seems obvious that the SLR would be better, but I’m amazed that the difference is so great.
I wonder what a top-line phone’s image quality would be like? Time for that 5s then?